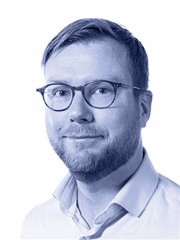 After finishing his PhD thesis on the seakeeping behaviour of high speed ships Pepijn worked as Assistant Professor in Ship Hydromechanics at Delft University of Technology. Besides continuing his work on high speed ships, he lectured in ship and offshore hydromechanics on various topics ranging from ship geometry and stability to resistance and propulsion. In 2015 he moved to the Maritime Research Institute Netherlands and became senior project manager seakeeping in the Ships unit, specializing in the seakeeping of naval ships, managing both model test campaigns and numerical studies. Pepijn is active in the Cooperative Research Navies, focusing on motions and stability of intact and damaged naval vesels in extreme waves. In 2019 he became team leader of the Navy Team. Pepijn is chairman of the ITTC Seakeeping Committee.

The defence sector is one of MARIN’s most important markets, and while we have a long-established relationship with the Royal Netherlands Navy, we ...
Magazine
Fast Small Ship Simulator takes to the waves for the first time!

Bouncing over the waves at a speed of 43 knots, the director of the Defence Materiel Organisation (DMO) Vice Admiral Arie Jan de Waard, and MARIN's ...
Paper
Validation of a time domain panel code for high speed craft operating in stern quartering seas

The paper describes the validation of a time domain method to simulate the behaviour of a fast patrol boat operating in stern-quartering seas. ...