DIFFRAC is a wave diffraction program capable of calculating the first-order wave loads and motion responses of multi-body free floating or moored structures in regular waves, including their hydrodynamic interaction. DIFFRAC is also capable of calculating the mean and low-frequency second-order wave drift loads. The program is applicable to both shallow and deep water and has been validated against many physical model test results.

DIFFRAC is based on a three-dimensional source distribution technique for the solution of the linearized velocity potential problem. For this approach the fluid is assumed to be inviscid, homogeneous, irrotational and incompressible. DIFFRAC computes fluid pressures and wave loads on the basis of the velocity potential around the floater(s), given as a scalar function in space and time. The effect of current can also be considered. For the computations, the mean wetted part of the hull of the vessel(s) is approximated by a number of plane elements. Each element represents a distribution of source singularities, each of which contributes to the velocity potential describing the fluid flow. The rigid lid method is used to suppress the effect of irregular frequencies. A damping lid may be used to damp resonant water motions, for example in the gap between side-by-side moored vessels.

DIFFRAC can also compute the mean second-order wave drift loads in regular multidirectional waves, and the low frequency second order wave drift loads in regular multidirectional wave groups respectively for six degrees of freedom on bodies of arbitrary shape. The second order wave drift loads are important for the design of mooring systems for floating offshore structures, dynamic positioning systems or control systems for semi-submersibles transiting at low drafts. Computations of wave drift loads can be carried out for structures with arbitrary shaped underwater hull geometries. Successful computations have been carried out for, amongst others, diving support vessels, tankers, barges, semi-submersibles, submarines, tension leg platforms, drillships, floating islands. The computations are based on direct integration of fluid pressures acting on the wetted part of the hull of a structure. The fluid pressures are obtained from Bernoulli's equation. The first order vessel motions and first order velocity potentials describing the flow around the vessel are required in order to compute the second order wave drift loads. 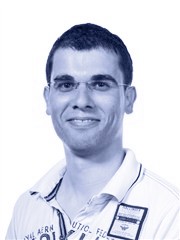 Forces and Motions in Waves

The wave loads and resulting motions on multibody systems in waves can be calculated easily. There is no limitation on the number of bodies other than memory. Systems with more than 300 bodies have been calculated. The effect of the water depth and current are taken into account.

Forces and Motions in Waves

The wave loads and resulting motions on multibody systems in waves can be calculated easily. There is no limitation on the number of bodies other than memory. Systems with more than 300 bodies have been calculated. The effect of the water depth and current are taken into account.

The natural frequencies of a containment system can be calculated. A damping lid can be used to damp the amplitudes of these natural modes in order to account for the viscous damping in the system.

Partners willing to collaborate with us and use DIFFRAC can become part of the DIFFRAC User Group. This comes with an unlimited number of parallel users, cpu cores and parallel computations. Members of the User Group express the intention to be long-term users. During User Group Meetings, experience is exchanged and future developments are discussed.